Field Photographer Friday is a weekly look at the lore and history behind locations around World of Warcraft. This week, we're taking a look at Karazhan!

Prales inside the Guardian's Library at the center of Karazhan

Karazhan was originally built by Aegwynn, a Guardian of Tirisfal, in a bout of paranoia caused by the dark presence of Sargeras' spirit looming over her. The tower would go on to host several beings of immense power and lure just as many adventurers to their death. It stands today as a peculiar landmark, situated in a volatile area of Azeroth. Entry to the tower is still sought by many who wish to use its hidden power for both malicious and benevolent acts.

Karazhan is located in what is now Deadwind Pass, a deep, jagged valley devoid of almost all life. The valley itself was created when Sataiel used the scythe Ulthalesh to drain the land and its inhabitants of life (the staff would later become the Affliction Warlock weapon in the Legion expansion). The explosion caused by the transfer of power was so massive it weakened the very fabric of reality in the area.

Deadwind Pass, looking out from Karazhan

The location of Karazhan was selected by Aegwynn, who was fully under the influence of Sargeras' spirit, due to its remote nature and because it was situated directly on top of the central meeting point for all of Azeroth's ley lines at the time, making it an area of immense, unharnessed power. She worked from the tower for hundreds of years before being tracked down by the Council of Tirisfal. Unfortunately for the Council, she had already sealed the tower and fled to the ruins of Suramar.

Many years later, the tower was inhabited by Aegwynn's son, Medivh. As an unborn infant, he had been infused with the power of the Guardian, but was also tainted by Sargeras' spirit that still dwelled inside his mother. Inside the tower, he bargained with the Orc Warlock Gul'dan, and together they orchestrated the opening of the Dark Portal. Medivh's apprentice, Khadgar, eventually discovered it was Medivh who opened the Dark Portal, and, with the help of Anduin Lothar, killed Medivh. Due to the unusual circumstances created by the weakened reality and powerful ley lines, Medivh's untainted spirit was released into Karazhan. 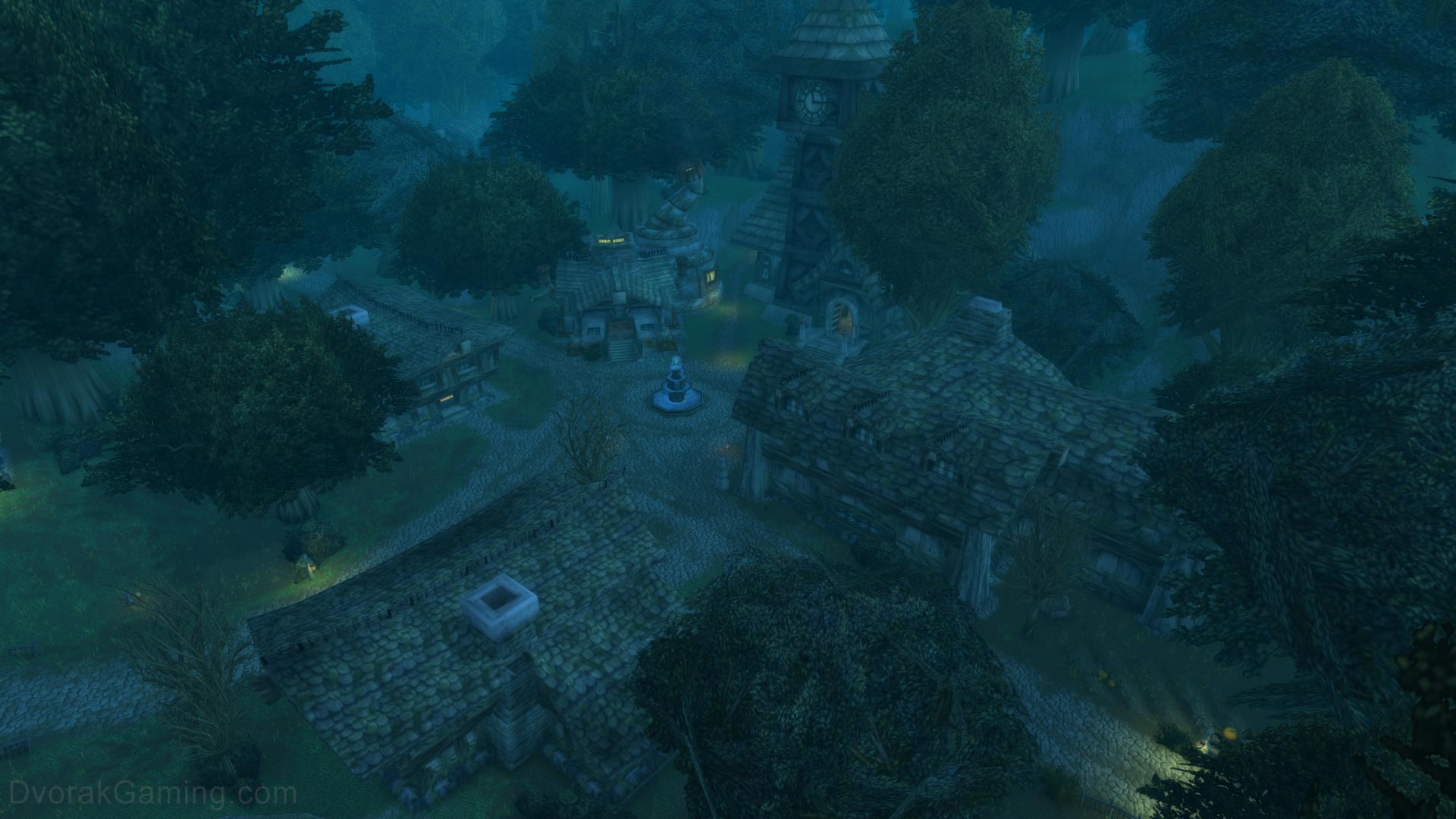 Following the Second War, the area now known as Duskwood grew dark and was invaded by shadowy creatures. The inhabitants of Grand Hamlet (Darkshire today) assumed the darkness originated from the nearby Karazhan tower. The paladins Dougan, Kardan, and Voldana led an expedition into the tower, but their raid failed as they quickly realized the ramifications of the weakened reality inside the tower. As they tried to escape, Dougan was killed, and his spirit was trapped inside the tower. As he wandered the halls, he came to realize the spirits of anyone killed in the tower would remain trapped.

With the release of World of Warcraft, nobles from Darkshire would once again venture into the tower to investigate the blight that plagued their town, but none would return. By this time, the tower had been drained of most of its power because the ley lines that once ran underneath it were redirected to The Nexus in Northrend, and most the tower's "reserve" power had been consumed when Medivh was resurrected many years before. Increasing activity by a group called the Dark Riders is the expected cause of the darkness surrounding Duskwood and Deadwind Pass. Led by Ariden, their primary goal is to obtain artifact weapons, and by now they were seeking out the Scythe of Elune inside Karazhan.

The Shade of Aran inside his private library

By the time the Burning Crusade expansion was released, Kirin Tor mages from Dalaran managed to safely make it into the tower and were slowly exploring it. With little warning, the tower sealed itself again, trapping the mages inside. It was soon discovered that several demons had also infiltrated the tower using a direct portal from the Twisting Nether, something once again made possible by the weakened reality around the tower. With help from other Kirin Tor mages, Khadgar was able to unlock the tower again, allowing Horde and Alliance heroes to clear out the ghostly and demonic inhabitants as part of the Karazhan raid instance. It's unclear what will ultimately become of the beings that were killed in the tower, presumably their spirits are still trapped, but what exactly that means remains to be seen.

The Legion expansion once again sees the tower's secrets and hidden powers playing a role. Leading up to the release of the expansion, Magni Bronzbeard revealed to Khadgar that Azeroth itself is a Titan, and to protect her we must obtain the Pillars of Creation. To help find these Pillars, Khadgar would seek out a book "Notable Antiquities of Ancient Azeroth" inside Karazhan. With assistance from an adventurer, Khadgar entered the tower only to find the protective wards had been sabotaged by Medivh's spirit, allowing the Burning Legion to enter the tower. After thwarting the Burning Legion forces and reactivating the wards, the adventurer left the tower with the book.

Mother of Medivh, the only female Guardian, and widely considered one of the greatest Guardians to ever exist.

The first necrolyte to walk Azeroth, wielded the scythe Ulthalesh.

Once a Titan of the Pantheon tasked with maintaining order and peace in the world, he would succumb to his thoughts and visions of chaos and go on to create and lead the Burning Legion.

Medivh was the last Guardian of Tirisfal, an ancient line of protectors bestowed with great powers to do battle with the agents of the Burning Legion. He was corrupted even before birth, and possessed by the spirit of the demonlord Sargeras -Wowpedia

A legendary wizard, Khadgar is a master of the arcane arts and a constant thorn in the side of the Burning Legion. -Battle.net

Known as the Lion of Azeroth, he served as a commander for the Kingdom of Stormwind, and later, the Alliance of Lordaeron.

Former king of Khaz Modan and former head of the Bronzebeard clan.

The undying steward of Karazhan and servant of Medivh.