Field Photographer Friday is a weekly look at the lore and history behind locations around World of Warcraft. This week, we're taking a look at The Dark Portal!

Prales standing on The Dark Portal

Special guest selfie, Virendra; she got all the pictures

The Dark Portal in Azeroth has always been located in The Blasted Lands on the Eastern Kingdoms continent. However, where it leads to and how it looks has changed over time. Today, the portal leads to an alternate time line of Draenor as part of the Warlords of Draenor expansion.

Opening of the Dark Portal

The portal was first opened by Medivh, with help from Shadow Council warlocks. At the time, Medivh was possessed by the fallen Titan Sargeras, Lord of the Burning Legion. The Shadow Council was lead by Gul'dan, an orc Warlock who had been corrupted by demon blood and served Sargeras. Sargeras wanted the portal opened so orcs from Draenor could invade Azeroth. This invasion was the start of the First War, and took place long before World of Warcraft's time. However, you can experience a small piece of it by going through the Opening of the Dark Portal instance located in the Caverns of Time.

Following the defeat of the orcs in the Second War, the Alliance secured the Dark Portal. Archmage Khadgar attempted to close the link between Draenor and Azeroth by destroying the physical portal. However, the tear in the fabric of reality that linked the two worlds still remained.

Ner’zhul, orcish Chieftain of the Shadowmoon Clan, orchestrated the second opening of the Dark Portal from Draenor. This event is something we don't directly experience in World of Warcraft. He opened the portal to Azeroth to obtain powerful artifacts that would allow him to open even more portals to other, untouched worlds he and his people could conqueror. He was successful in retrieving the artifacts and an Alliance force was sent through the portal after him. As planned, he opened portals to the other worlds, causing Draenor to be ripped apart - turning it into Outland as we know it today. The Alliance survived and destroyed the physical portal, this time on the Draenor/Outland side. 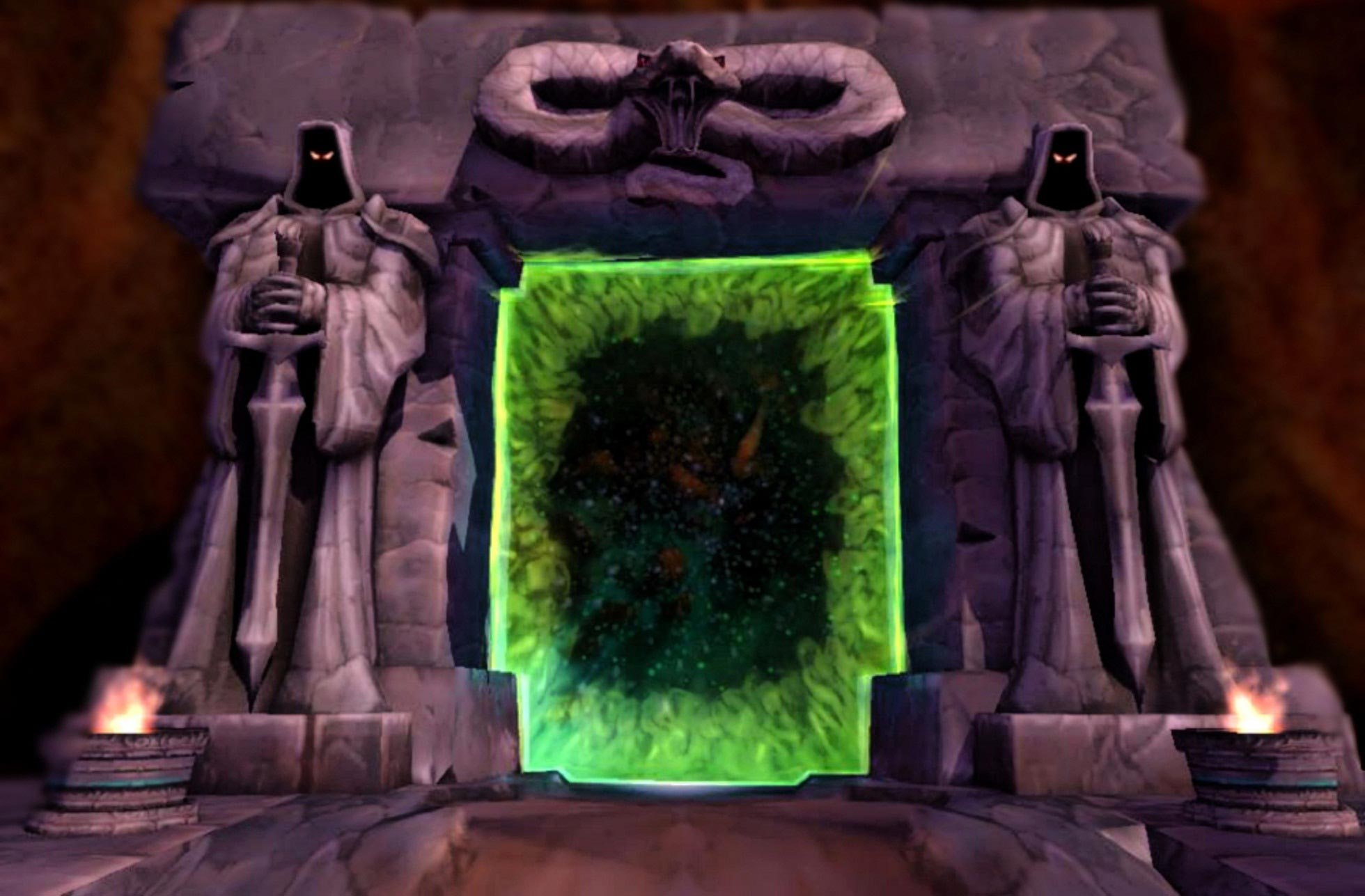 Not long after, the portal was opened for a third time by the demon Lord Kazzak, a lieutenant of Kil'jaden. This is the setup for the Burning Crusade expansion. Lord Kazzak crossed through the portal into Outland, letting loose hordes of demons into Azeroth. Horde and Alliance heroes defended against the demons and pushed through the portal to finish the job. With the worst demonic inhabitants of Outland killed or imprisoned, the Dark Portal was secured on both the Outland and Azeroth sides. This time, neither physical portal was destroyed. Instead, a loose partnership between inhabitants on both sides of the portal worked to keep it secure. 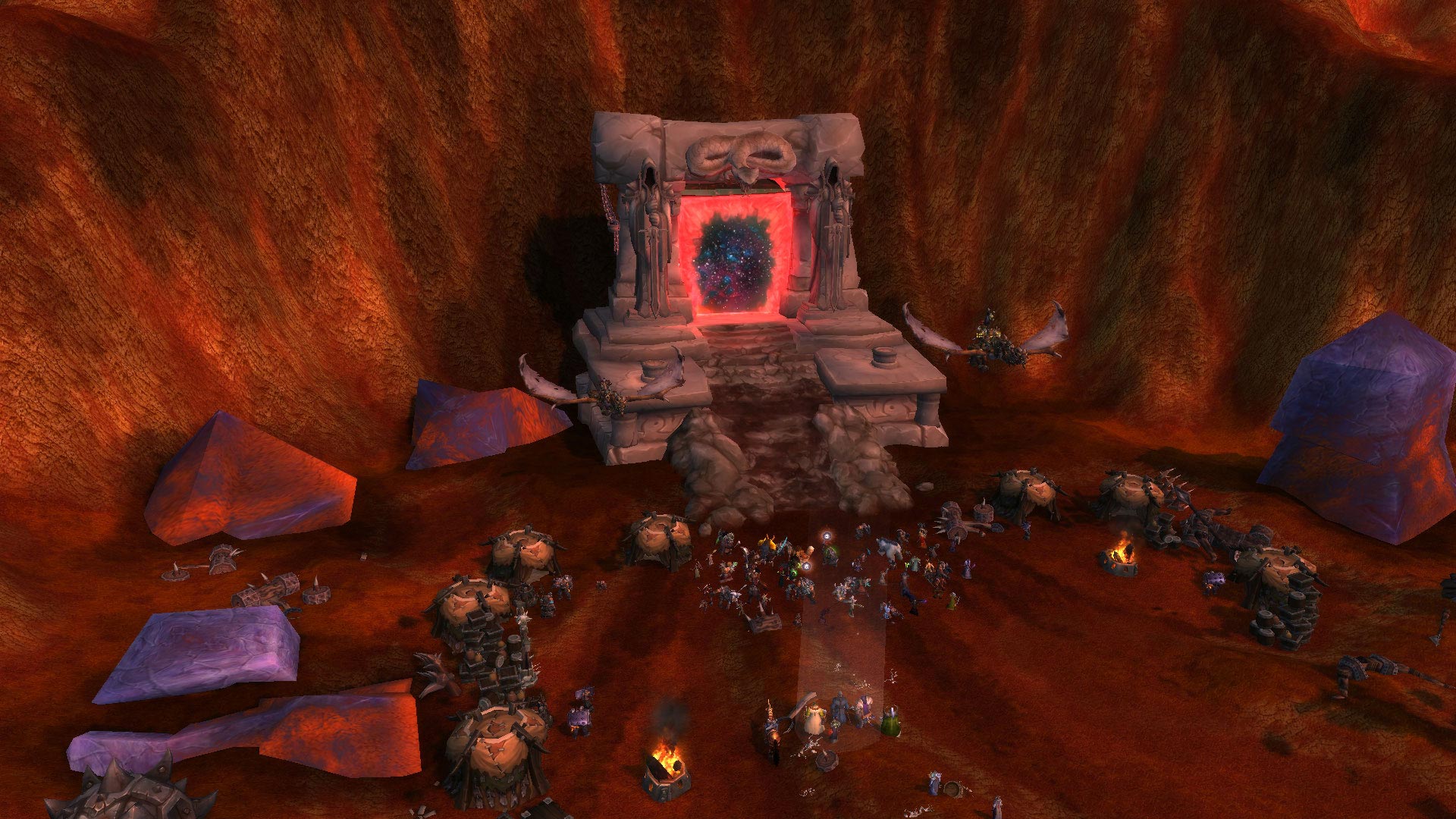 The portal remained as it was until after the events in the Mists of Pandaria expansion. Following the Siege of Orgrimmar raid, Garrosh was imprisoned. After escaping from prison, and with the help of the bronze dragon Kairozdormu, Garrosh linked the Azeroth portal up to an alternate universe's portal in Draenor. Garrosh stopped the orcs from drinking the demon blood and falling under Sargeras' command. He proceeded to rebuild his version of the Horde in the alternate Draenor, and quickly invaded present-day Azeroth. After a fierce battle in The Blasted Lands, Horde and Alliance heroes once again pushed the orcs back through the Dark Portal. On the other side, they used the Iron Horde's weapons to destroy the physical Dark Portal on alternate Draenor; stopping the invading orcs.

The Dark Portal now sits as a link to alternate-universe Draenor*. Given the portal's tumultuous past, it will be interesting to learn where it takes us next!

*It was unclear to me in my research why The Dark Portal still leads to alternate-universe Draenor. It's possible this is simply a game play mechanic and that in the lore there is no longer a physical portal link between alternate Draenor and preset Azeroth. If you have any information on this, I'd be happy to update the article! Just leave a comment or send me an email.

Medivh was the last Guardian of Tirisfal, an ancient line of protectors bestowed with great powers to do battle with the agents of the Burning Legion. He was corrupted even before birth, and possessed by the spirit of the demonlord Sargeras -Wowpedia

Once a Titan of the Pantheon tasked with maintaining order and peace in the world, he would succumb to his thoughts and visions of chaos and go on to create and lead the Burning Legion.

A legendary wizard, Khadgar is a master of the arcane arts and a constant thorn in the side of the Burning Legion. -Battle.net

The Elder Shaman Ner'zhul was the Warchief of the Draenor clans that remained uncaptured after the Dark Portal was originally destroyed in Azeroth.

Lord Kazzak is a powerful doomguard commander. Once commanding the forces of the Burning Legion on the world of Azeroth, Kazzak was responsible for the reopening of the Dark Portal. -Wowpedia

Garrosh Hellscream, former Warchief of the Horde, is a living testament to the dangers of unchecked aggression.
-Battle.net

Kairozdormu is a mysterious bronze dragon affiliated with a faction of bronze dragons that believes they should change history to create a better future.

The former slave known as Thrall brought unity to the Horde, turning ravagers into architects and securing a future for his people. -Battle.net