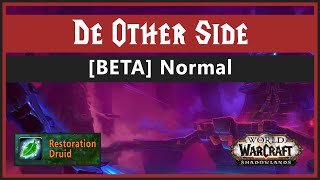 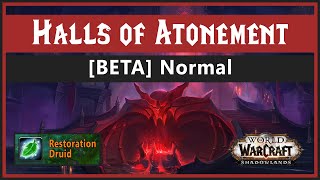 Updated 2 months ago for patch 8.3 by Preston. View the change log.

This page gives an overview of corrupted gear effects beneficial to Restoration Druids and the corresponding negative effects that can be gained.

Starting in patch 8.3, most items have a chance to gain a positive effect along with an amount of corruption to offset that effect, similar to the random chance of warforging or titanforging in previous patches. The total amount of corruption on your gear accumulates and leads to more harmful and disruptive effects at higher corruption levels.

Feedback is appreciated, you can leave comments at the bottom of the page, or tweet @PrestonDvorak.

Positive effects on corrupted gear range from static stat increases, to stat procs, to unique effects. Many effects have three tiers, with the highest tier giving the most powerful effect but also the highest amount of corruption. Generally speaking, any single positive effect is worth having versus the amount of corruption it brings, the complicated part comes when balancing the corruption from multiple pieces of gear.

The list below is ranked as if the positive effect is at the highest tier it can be and doesn't take into account having multiple pieces of corrupted gear (more information on balancing corruption levels is available below).

All negative effects are cumulative and gain strength with more corruption.

At more than 0 corruption,

Grasping Tendrils gives a chance on taking damage to have your movement speed slowed for 5-seconds.

At 20 or more corruption,

Eye of Corruption gives your spells a chance to summon a tentacle that deals increasing damage over time for 8-seconds or while you remain in range. Damage and range are increased with more corruption.

At 40 or more corruption,

Grand Delusions gives a chance on taking damage to summon a Thing from Below that pursues you for 8-seconds, dealing heavy damage if it reaches you. Movement speed and damage dealt are increased with more corruption.

At 60 or more corruption,

Cascading Disaster causes the Thing from Below to immediately trigger

Eye of Corruption and

Grasping Tendrils if it reaches you, in addition to the usual damage.

At 80 or more corruption,

Inevitable Doom increases your damage taken and decreases your healing received based on the total corruption you have.

Inescapable Consequences deals 25% of your maximum health as damage to you every second.

There are two ways to mitigate your total corruption, allowing you to equip more corrupted items without as many negative effects.

Ashjra'kamas, Shroud of Resolve reaches rank 15, it will have 50 corruption resistance.

Ashjra'kamas, Shroud of Resolve is at rank 15 you can begin collecting one

Malefic Core per week to add 3 additional corruption resistance, up to 125 total.

How much corruption is too much?

In my opinion, having 59 or less unresisted corruption will be manageable in most situations, especially as a healer. 60 or more corruption will come down to personal preference and what you're comfortable with, so I recommend experimenting when you can!

As an example, if you have your cloak at rank 15, with no

Malefic Core upgrades, and one new essence socketed, you could use the following:

This leads to a total of 35 unresisted corruption.

If you get a corrupted item and aren't interested in the positive effect or just want to use the gear as normal, you can cleanse the item at MOTHER in The Chamber of Heart, accessed from the Titan Translocator in Silithus. You unlock a short tutorial quest, Curious Corruption, after looting your first corrupted item. Cleansing an item removes both the positive effect and the corruption and cannot be reversed.

May 25, 2020 - 6:43 pm (Talents and Builds) - Added Abundance as an alternate with Cenarion Ward in the raiding cooldown build.